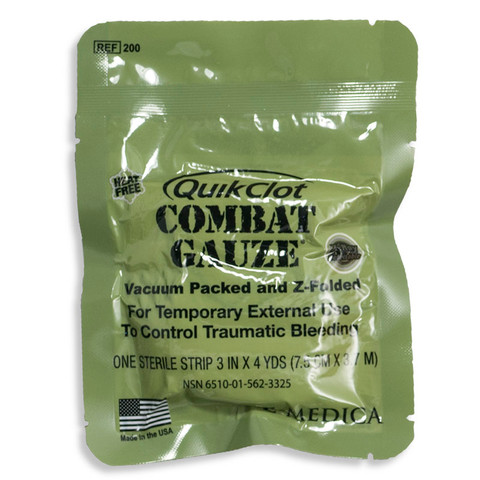 Hover over image to zoom

The ease of gauze. The power of QuikClot. Pack It. Wrap It. Stop Bleeding NOW!

Tailored to the needs of combat and tactical medical personnel, QuikClot® Combat Gauze™ combines surgical gauze with a proprietary inorganic material that stops arterial and venous bleeding in seconds – even more rapidly in this format than earlier Z-Medica products. Based on a different mineral than zeolite-based QuikClot® products, it generates no heat. It shares the benefit of being inert and non-allergenic.

Combat Gauze provides the ease of gauze but with an added clotting agent embedded within providing the power to stop even the worst arterial and venous bleeding. The user simply packs the Combat Gauze dressing into the wound just as they have been taught in any basic first aid class over the years, and applies pressure for 3-5 minutes. Even the most traumatic arterial and venous bleeding is stopped. QuikClot Combat Gauze is so pliable that it conforms to virtually any size or shape of injury you will encounter. It is easily removed once clotting has taken place.

All prices are in USD.